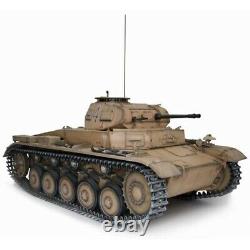 Engine compartment ventilation grills exquisitely detailed. 75025, which created worldwide excitement in the modeling and 1/6 action figure community! Now Dragon has doubled the number of Panzer IIs available with a second variant release! This time its a Panzer II Ausf. C, a type produced by Germany from June 1938 through till April 1940.

It was operated by a crew of three, and the Ausf. C was the most common variant of the Panzer II family. In the turret were a 20mm KwK. 30 cannon and a 7.92mm MG34 machine gun. C tanks were in the forefront of the German invasion of France in 1940, while a number were also dispatched to North Africa to fight with the legendary Deutsches Afrika Korps (DAK).

Even though the original tank was diminutive in size, this kit built to 1/6 scale has an awesome presence and its one of Dragons biggest ever models. Elements are accurately represented, and building in this scale presents a whole new experience for model-makers. Take the track links, for example. Owners can assemble the individual track links one by one, just like on the original tank.

Details are accurately represented, and there are numerous new components such as the cupola, turret, glacis plate and engine deck. The turret rotates, the gun elevates and depresses, plus the commanders hatch can open, just perfect for fitting in a Dragon Action Figure. Collectors will certainly want to clear space to park this scintillating Panzer II Ausf. The item "Dragon 1/6 Scale 12 WWII German Panzer Pz. C Tank Kit 75045" is in sale since Monday, December 6, 2021.